What if you took a classic English fashion product and gave it a full-on makeover? Using new colours, shapes, materials, styles, and in so doing made it relevant for a whole new generation of fashion conscious men and women?

Keeping the principles of its production past in mind, what if the company opened boutiques in trendy neighbourhoods, set up pop-up showcases for leading edge fashion bloggers and in so doing attracted celebrity customers and film and television attention?

That’s what the folks at Grenson Shoes are doing these days. The company, founded in the mid-19th century, has been making classic “Goodyear Welted” (separate uppers and lowers, designed to last) shoes in its Northamptonshire factory for generations of practical men. But a few years ago it was clear they were falling behind the pace and a man called Tim Little jumped in. 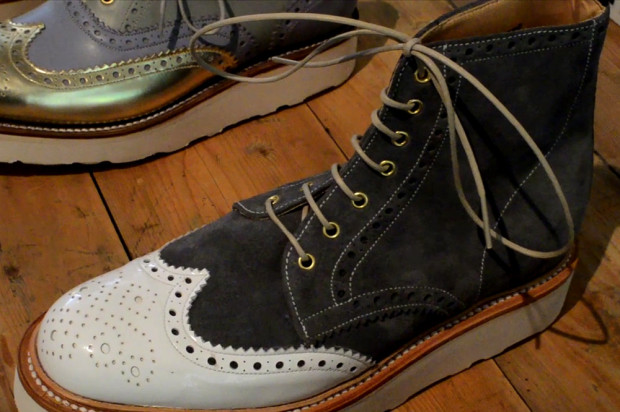 Little has his own leading edge shoe brand. He worked with Grenson, expanding the range of their classic styles, stepping up their marketing, and expanding their customer base. The original shoe styles can now be purchased in gold, green, silver, and red. He made them lighter, appealing to younger buyers, more familiar with running shoes than brogues. He also made them smaller, allowing women to buy the classic styles in their sizes. He also expanded the pricing, giving customers the choice of cheaper “knockabouts” or higher end luxury shoes in fine European leather.

Grenson was kind enough to invite The Department to one of their industry showcases in London’s Soho.

footwearGrensonshoes
« Previous PostCleverley Shoes Next Post »Baby it's dark outside