Some artists use paint, clay, marble, bronze, or gold. The medium George Barris uses is the automobile. For more than seventy years Barris has pushed the boundaries of body work, paint, and motors to produce four (and sometimes six!) wheeled fantasies. It would be hard to imagine many of the great film and television characters without their unique modes of transportation. Batman, the Munsters, Starsky and Hutch, Knight Rider. If he wasn’t building cars for the movies he was building cars for the stars. Everyone from John Wayne to Zsa Zsa Gabor, Elvis to Dean Martin. They all rode in Barris style.

It is his originality that makes every Barris product so instantly recognizable. The way Michelangelo looked at a large chunk of marble and saw a masterpiece, Barris can look at an average American-made automobile and see a rolling creation that has the power to awe and amaze.

We’ve run across George at several shows around the world, including Yokohama. He’s always the most energetic one in the room. And always quick to invite you drop by his North Hollywood workshop and showroom if you’re ever in town.

He’s called the Kustom King. Kustom with a “K” is now an industry standard, as if to say “we alter the cars AND the language.” His one regret is that he never trademarked that special spelling. But that’s pretty much the only thing he would have done differently. His motto is simple: “Where there is a will, there is a way. Just do it.”

George Barris may use steel, lead, a blow torch, and a hammer. But make no mistake. He’s an artist just the same. 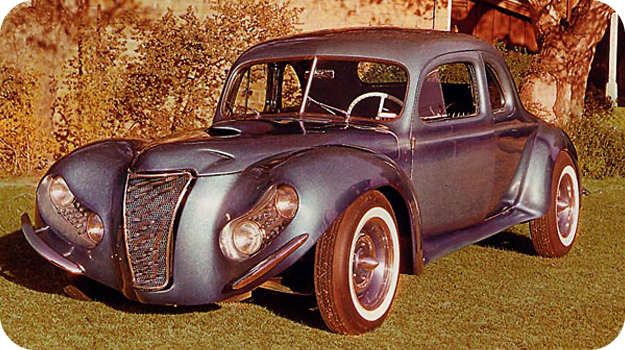 Please note: the photos of the cars in this story are courtesy Barris Kustom Industries.